The summer has gotten away from me.  Now, the days are getting shorter, football’s in full swing, and normal life as a Northeast Ohioan will soon resume. Now it is time to reflect on some of our fun food adventures of the summer – and there’s one morning meal that has been quietly lurking in the back of my mind for far too long.

END_OF_DOCUMENT_TOKEN_TO_BE_REPLACED

Valentine’s Day, for us, translates to an entirely justified excuse to splurge on a fantastic meal.  Several weeks before the big day, I was starting my search for the perfect restaurant. Requirements: somewhere we’ve never been, sexy and modern atmosphere, and obviously, really delicious food from an innovative menu.  V-Day also gives us (me) an excuse to drive excessive distances to achieve said requirements.  So after a week or so of hemming and hawing between a few various spots on my Urbanspoon wishlist, we decided on Spice Kitchen & Bar, on Detroit Ave in the Gordon Square neighborhood just west of Cleveland. 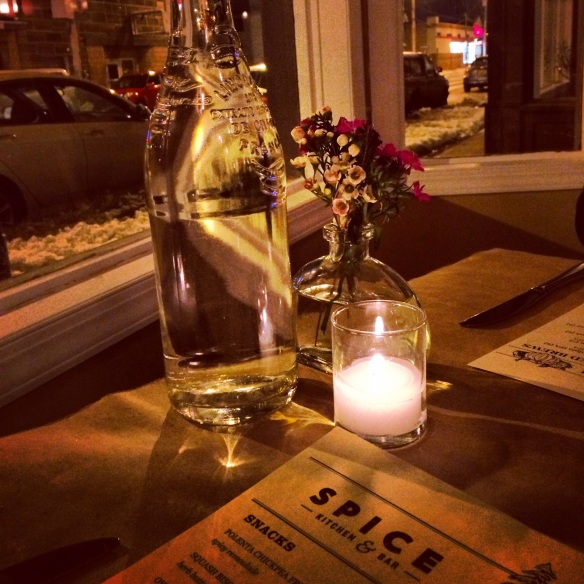 END_OF_DOCUMENT_TOKEN_TO_BE_REPLACED

I wanted to take my mom somewhere special for Mothers Day, because, well, she’s the best, and of course loves to eat like I do, especially Mexican food; in fact, she actually cooked professionally at a Mexican restaurant in California, so she knows her stuff.  It seemed only logical to kill two birds with one stone: treat my mom to a delicious Mexican feast AND get some new blog material in the meantime.  Enter Momocho. 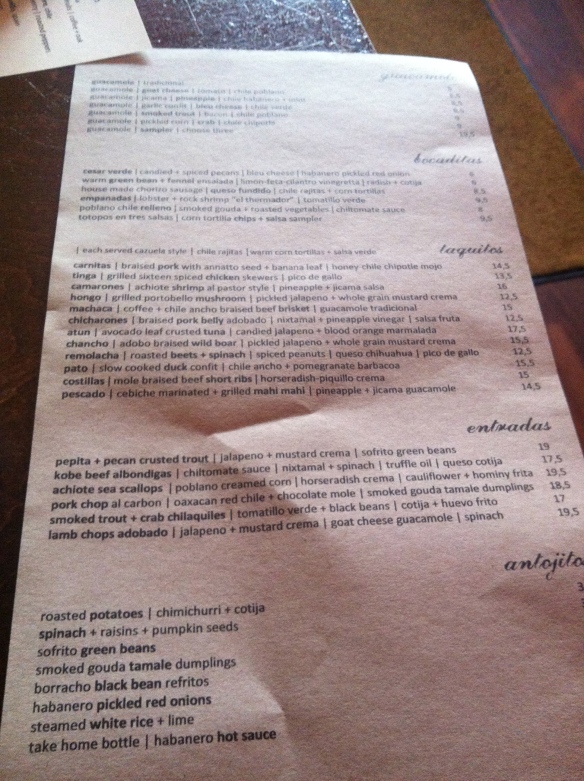 END_OF_DOCUMENT_TOKEN_TO_BE_REPLACED

We recently had the privilege to dine at The Greenhouse Tavern, Jonathon Sawyer’s green “gastropub” on East 4th Street in downtown Cleveland, focusing on sustainability and the farm-to-plate movement.  It was downtown Cleveland restaurant week, so I decided it was about time to see what all the hype was about.  Let’s get to the point, I’ve been talking about GHT since we had dinner there two months ago.  And frankly the only reason I haven’t blogged sooner is that I was afraid I wouldn’t do it justice.  Chef Sawyer, if you’re reading this, please forgive me for butchering descriptions, it’s going to happen.  All I can say is it was a lot to take in; plus, I think I slipped into a food-induced “high” of sorts about midway through the meal. 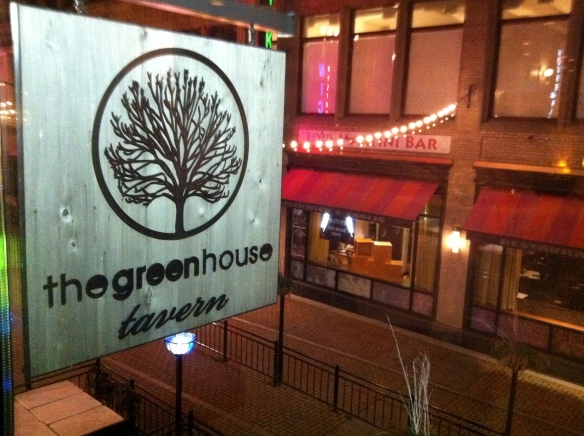 END_OF_DOCUMENT_TOKEN_TO_BE_REPLACED

The day before Easter, we finally made our first trip to the West Side Market in Cleveland’s Ohio City neighborhood.  I decided to take the whole crew with me for a mini road trip.  We arrived shortly after lunch time (on a Saturday, they are closed Sundays), and it was packed with people.  Inside, as expected, was a delight to the senses.  We started in the produce section, which had it’s own entire building of vendors.

END_OF_DOCUMENT_TOKEN_TO_BE_REPLACED

In an exciting part two of NEO Food Tours’ Battle for Battery Park, we continued to the next competitor, only a block away from Battery Park Wine Bar. Reddstone is a “watering hole and grub hub” with a great outdoor patio that’s a blast in the summer.  It’s completely hidden from the street, which I love.  Of course in February, we weren’t going to the patio.  The evening’s events were hosted upstairs in a dimly lit private room with its own bar and stage.  With probably around forty people on the tour, plus the hosts for the evening, Ramon Rivas and Todd Gauman, and another half dozen or so guest judges, the room was pretty packed.  The lack of lighting was great for atmosphere, but made it tough to really appreciate the beauty of the food.  So I had to use the flash for the pictures, which I hate doing…but you can get the idea.

The space was much more intimate than Battery Park Wine Bar, but that wasn’t such a bad thing.  There was a small raised stage to the side, which allowed the comedians to be right next to the audience.  There’s a possibility they were a bit too close – story to follow.

END_OF_DOCUMENT_TOKEN_TO_BE_REPLACED

It was a random Monday night in February when two Canton foodies headed to Cleveland, in anxious anticipation of their first NEO Food tour.  The event: Battle for Battery Park, where two neighborhood restaurants, Battery Park Wine Bar and Reddstone, were to duke it out in “Cleveland’s First Ever Comedy Food Fight.”

END_OF_DOCUMENT_TOKEN_TO_BE_REPLACED

After a recent Sunday drive to Beachwood for some pre-wedding shopping (DZ’s favorite), we decided to reward ourselves with a jaunt over to downtown Cleveland for an early dinner, thinking it was a good time to take a chunk out of my ever-growing wishlist of Cleveland restaurants. I’ve been antsy to try Noodlecat, the new Jonathan Sawyer venture on Euclid, right around the corner from his popular Greenhouse Tavern on East 4th, (also on the wishlist, but we were saving it for Restaurant Week, stay tuned.)

END_OF_DOCUMENT_TOKEN_TO_BE_REPLACED

Error: Twitter did not respond. Please wait a few minutes and refresh this page.