Checking out a new restaurant on your birthday could be considered a risky endeavor. Some might call it foolish, especially when that restaurant is not only new, but practically “off the grid” when it comes to an online presence of any kind, (although they have since established a website). Such was the case with the new talk-of-the-town downtown Canton restaurant, Basil Asian Bistro. Despite maintaining quite a mystique in the first few weeks, every food lover in Canton was facebooking and tweeting about it. It was practically a race to see who could get there and talk about it first.

Basil opened almost quietly, with a not-so-well-publicized “grand opening” occurring on June’s First Friday; it wasn’t until I was poking around and happened upon this info on First Friday’s website. So while I had been hearing some word-of-mouth chatter, we hadn’t actually seen a menu or heard a real review of any kind. Still, something told me it would be worth checking out, so I hinted around to DZ until he dutifully made a reservation for my birthday. Oh subtlety.

Occupying the former Brownstone and Little Chicago location, Basil has a large space, with two separate rooms: the front one containing the bar and a handful of high top tables, and the second room being the large main dining space with all low and moveable tables and chairs. Much like their temporary vinyl banner signs outside, the inside felt like it was a work in progress in terms of design. There had obviously been painting, new light fixtures (chandeliers), and different furniture and decor, but the layout remained unchanged from restaurants past. DZ and I both thought some large semi-private booths would be interesting along the south wall. Something to kick up the swank factor just a touch. 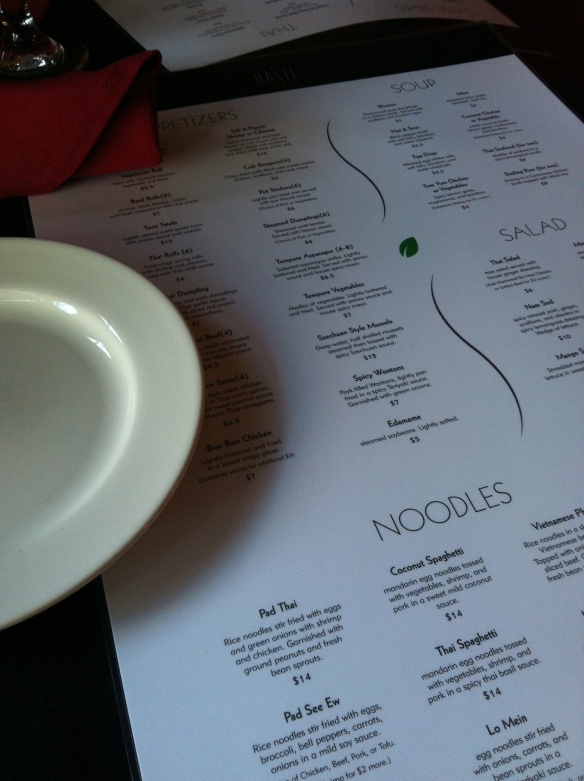 The menu was extensive and creative, consisting of a large sushi menu, and a second menu of Thai, Chinese, and Korean inspired dishes. We had a tough time narrowing it down.

We started off with a personal favorite of mine, fresh spring rolls. Known here as “Basil Rolls” these cold rolls contained shrimp, lettuce, onion, and basil wrapped in thin rice paper with a slightly spicy sweet peanut sauce; a light and refreshing start to the meal. 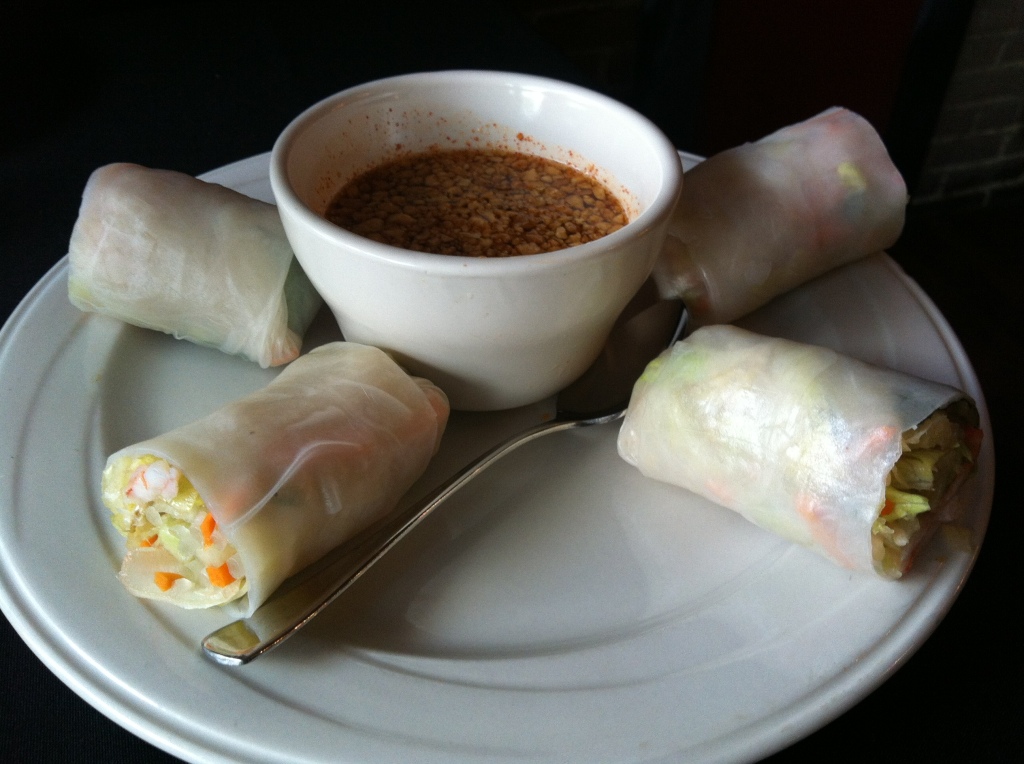 For the main event, we chose two entrees to share – Dave chose the Korean Sizzling Steak and I opted for Coconut Spaghetti. First, the steak:

The beef was transferred table-side onto a sizzle platter, which created an exciting start to the meal. It hissed and popped and smelled unbelievable. This dish tasted even better than I imagined; just the right amount of heat, lots of flavor, with a rich, smoky sweet, almost caramelized glaze that you could drizzle down over your rice and enjoy. The vegetables were al dente, cooked to perfection as well. I would not hesitate to order this dish again. We left not a single morsel on the platter. 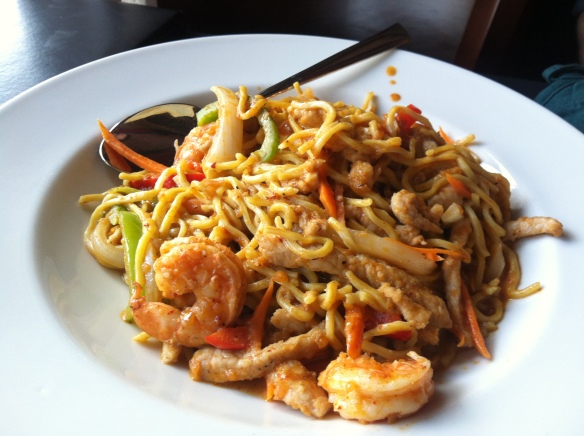 …except that it was fantastic, too! The sweet creamy coconut sauce was a perfect compliment to the veggies, shrimp and chicken. And the noodles were to die for. This dish was very similar to Pad Thai but with a coconut milk sauce instead. It was like a cross between Pad Thai and yellow curry chicken, except that noodles were heartier, more like Udon.

Because the food thus far was so delicious, and it was my birthday, we went all in and ordered a dessert to share. Dave let me choose (another birthday perk) and I opted for the house special, fried bananas with coconut ice cream. 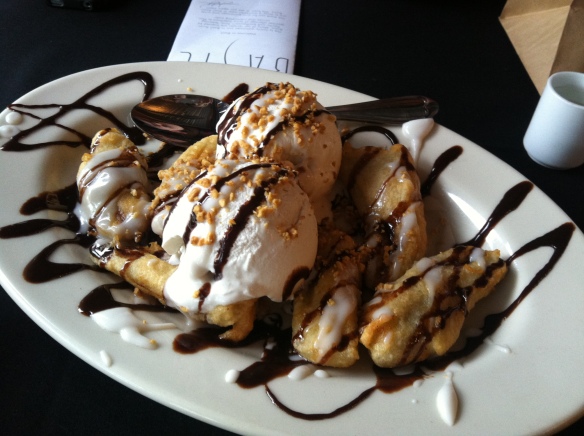 Because Dave had made a reservation and mentioned that it was my birthday, our dessert was delivered by the whole crew singing ‘Happy Birthday’ to me. Normally I would be very annoyed by this, but the service was so delightful throughout the entire meal, and it was pretty quiet in the restaurant, so I decided to just enjoy the attention. Dave got the whole thing on video…awesome.

We weren’t sure if this was a typical portion size, or if they doubled it up because we were sharing, but it was absolutely huge. Two ginormous scoops of what I realized immediately was homemade coconut ice cream, along with a whole slew of lightly breaded and fried bananas, and a duo of sauces – one coconut and one chocolate. Again, I think we basically licked the plate when we were through. Un. Freaking. Believable. I literally dreamed about the homemade ice cream for weeks. They also have avocado ice cream – definitely something to try next time.

All things said, I highly recommend you head downtown to Basil Asian Bistro for your next Asian fix. I do hope they are able to get their business off the ground right away; an outstanding ethnic restaurant is exactly what downtown Canton needed. Delish!